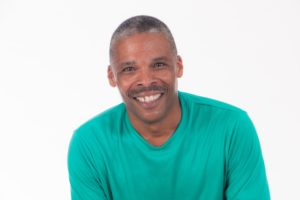 Yoga Teacher. David Clay Beginning July 1st (every other Wednesday until September 23rd) I will be teaching a series of classes called “Move the Body, Quiet the Mind” at Dewey Humboldt Library.  These will consist of 1 hour of Chair Yoga followed by 15 minutes of meditation (mindfulness practice).  The classes will be online (virtual) until further notice due to COVID19. For more information they can contact me or DHL at 928-632-5049.
David Clay also offers a mixed level Vinyasa Flow Yoga class groups or private sessions. Call (928) 458-5577 for more info. See Classes/Events or call (928) 458-5577 for more info. I teach Yoga for Beginners at Mountain Spirit Co-Op on Thursday and Friday evenings from 6:30-7:30 and Saturday mornings from 10:00-11:00. My intention is to gently guide beginner level students in a transformative Hatha Yoga practice focused on finding spiritual at-one-ment through the revealed synergies of mind, body, and soul. I offer modifications of traditional yoga poses empowering each student to practice safely while increasing their flexibility and relieving tension and stress.

About David I did my Yoga teacher training in Richmond Virginia at Grace Yoga Studios under the inspired guidance of my teacher—Arlene Bjork. I studied Hatha Yoga under Arlene’s supervision from March 2009 until her sudden death from a pulmonary embolism in October of that year.

I then deepened my study of the Ageless Wisdom while nurturing my private Hatha Yoga practice. I have a background in Vinyasa Flow Yoga as taught in the Jivamukti Yoga Studio in New York. Its directors, Sharon Gannon and David Life, were Arlene’s teachers. The Jivamukti approach allows students to push through physical, emotional, and mental boundaries toward a unity and calmness of mind, breath and body.

I grew up feeling that something was “different” in my world view. I was raised Baptist and found myself believing in some aspects of the scripture while rejecting others. I began asking questions of respected adults in the church. These questions led to deeper questions until I found myself on a full blown search for what I called a unified field theory of religion. I was searching for those things that we as humanity have in common—not the things that separate us along national, racial, or religious identifications. All of these divisions seemed arbitrary and illusory. I read books on Zen Buddhism, Taoism, Sorcery, Gnosticism, the Seth Material, Messages from Michael, Carlos Castaneda and others. These texts pointed to the presence of a rich interconnected reality. I began to think about creating my own religion, which would be a religion of one (myself) where I would explore and express the essential unity of All Things. Just when I had decided to quit the externalsearch for a unified field theory of religion, I discovered Theosophy. There I found that my search had been completed by others, by people with whom I had worked during lifetimes prior to my present one.

Theosophy (which means “knowledge of God”) teaches that by the Law of Correspondences, something of the Divine Source can be known—that the Divine is within all things. This study lead me to re-discover a rich inner world—an inner realm of the Soul, Ascended Masters, Angels, Elohim, Solar and Planetary Logoi, etc… This inner reality would become my primary focus, as the inner became more relatively real than the outer so-called reality. I began to see the outer as a reflection of inner states of consciousness. Much of this was gleaned in hours of meditation, creating art, and reading the Ageless Wisdom. Revealed in the ancient and current texts of Ageless Wisdom are many instructions to disciples that point to three things one can do in terms of service to the Spiritual Hierarchy and humanity: (1) Service to the Plan and to humanity, (2) the study of the Ageless Wisdom and (3) regular practice of meditation.

As an artist throughout the 1990’s I opened up to the Soul, which I began to sense during creative sessions. This allowed that inner guidance to inspire my artistic expression. Receiving this downflow of soular energy strengthened the influence my Soul had with Its personality vehicles. Over the years I continued to allow the Soul to express more and more fully through its vehicles of expression (the four lower bodies—dense physical, etheric physical, astral/emotional, and concrete mental).

Part of the service to humanity aspect of my focus involves instructing people in the ancient scientific system of self-care called Hatha Yoga. The consistent practice of Hatha Yoga can aid in healing many diseases and prevent a plethora of ailments. I decided to join the long lineage of teachers of the science of Hatha Yoga in order to help alleviate unnecessary suffering and bring peace, ease, and health. Very often the aches and pains as well as effects of preventable disease distracts the individual from fulfilling their divine purpose. Sometimes these ailments have a karmic cause that must be discovered and resolved by the individual. Hatha Yoga, when practiced correctly and mindfully, is holistic in that it works on the dense as well as subtle bodies and aligns body, emotions, and thoughts with the Soul’s purpose. Such alignment can reveal the individual’s purpose and inspire the creation of a joyous reality.

I continue to nourish my thirst for truth via Hatha, Raja, and Agni Yoga, meditation, and service, and seek to share what I have gleaned with others.

In addition to my certification as a Hatha Yoga instructor, I am a certified teacher of the New Thought-form Presentation of the Wisdom. I teach evening classes on esoteric philosophy online on Mondays, Tuesdays, and Wednesdays and classes in Hatha Yoga on Thursdays, Fridays, and Saturdays at Mountain Spirit Co-Op. My website is www.seraphicyogi.com.

I am also a telepathic healer.

While training to become a Yoga teacher, I completed two workshops on Anusara Yoga and a workshop on Pranayama.

I Taught a beginners Hatha Yoga class at Charlotte County Fitness and Recreational Center in Virginia.

I led Satsang at Solid Ground Yoga Studio in Midlothian Virginia, with emphasis on exploring The Yoga Sutras of Patanjali.

I participated in several MS 150 bicycle events to help raise money and bring awareness to multiple sclerosis research, completed several 100 mile bicycle rides, ran several 10K’s, a ½ marathon, and ran the Richmond Marathon in my 40’s. I hiked the Virginia portion of the Appalachian Trail in 2006. I participated in two sprint triathlons in 2008. I still enjoy running, hiking, cycling and tennis which are perfectly supported by a consistent practice of Yoga asanas.

I’m a graduate of East Carolina University where I met my wife of 31 years.